One of my favorite sayings has been made in decorations of several sorts. One year for Christmas my daughter, Emily, gave us a star which hangs in our kitchen now. 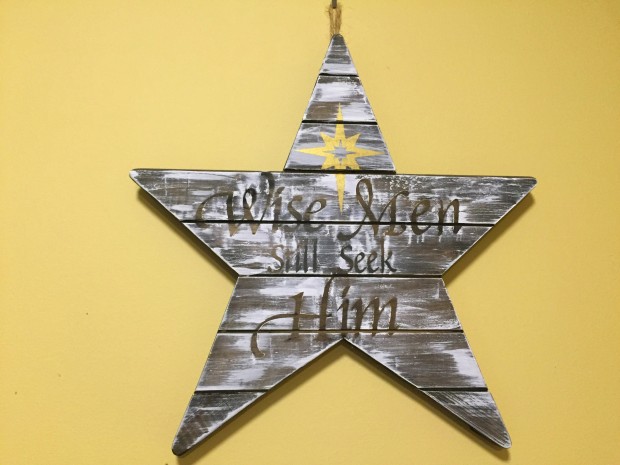 Matthew 2:1-10 (HCSB) After Jesus was born in Bethlehem of Judea in the days of King Herod, wise men from the east arrived unexpectedly in Jerusalem, saying, “Where is He who has been born King of the Jews? For we saw His star in the east and have come to worship Him.”

“When King Herod heard this, he was deeply disturbed, and all Jerusalem with him. So he assembled all the chief priests and scribes of the people and asked them where the Messiah would be born. “In Bethlehem of Judea,” they told him, “because this is what was written by the prophet: And you, Bethlehem, in the land of Judah, are by no means least among the leaders of Judah: because out of you will come a leader who will shepherd My people Israel.”

“Then Herod secretly summoned the wise men and asked them the exact time the star appeared. He sent them to Bethlehem and said, “Go and search carefully for the child. When you find Him, report back to me so that I too can go and worship Him.” After hearing the king, they went on their way.

“And there it was—the star they had seen in the east! It led them until it came and stopped above the place where the child was. When they saw the star, they were overjoyed beyond measure.”

Now we know little about these wise men.  We do know that stars are most easily seen in a clear night sky. There is a man made star that we can see at this time annually when the people who own a house on the hill light it up. We see it from a four lane highway at 55 MPH.

The other day after church Bob decided he wanted to find where that house was, where that star was. We started off up the hill on a sunny Sunday afternoon circling into various subdivisions. Our hunt was for naught. Too many houses with private drives up there! We will just have to admire it from afar and be reminded as we pass that wise men were led to the Savior by a star.

I was giggling inside as we made our way home. What does it say about us that we were searching for a star on a sunny afternoon? Maybe not too wise? Except really good at wise cracks! 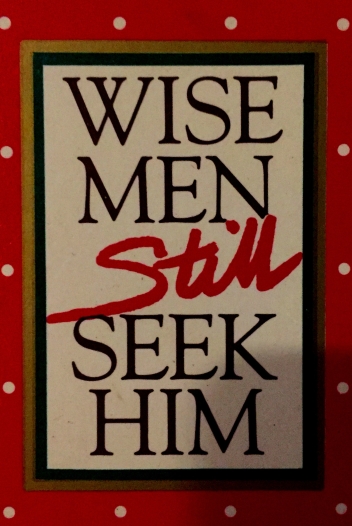 We do still seek the Savior to come and fill us at a greater depth during this season of Advent and all the year long.

50 YEARS as wife to Robert! Still deeply loving that man!! He is often responsible for the photos I post. I try to always give him credit! View all posts by Molly Lin Dutina